The 1983 F3B World Championships were held in York on the Racecourse. The organising committee included some real cool dudes!!

A well thumbed Plans Handbook from around 1962

A page from the C/L Stunt section. I made both 'Blue Pants' and 'Skua' shown on this page. Other stunt models made included 'Princess', 'Calamity Jane' and 'Cheshire Kitten' 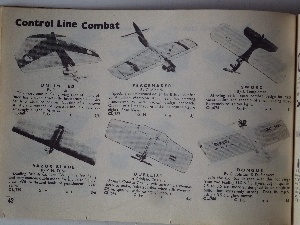 A page from the C/L Combat section. Everyone must have made a 'Peacemaker' at some time or other. I think mine is still in the loft! Also constructed from this page was a 'Razor Blade' and a 'Dongus' Other combat models made from the plans handbook include 'Pedro' and 'Splatt' At the same time Clifton Airfield was in use, Elvington Airfield, then probably still operational, was occasionally used for Model Aircraft Rally's. This leaflet dated 1962 for an 'Air League Model Rally (?)' Above programmes and Leaflets from Dave Sanderson An original Keil Kraft Dolphin kit. Acquired not long before Keil Kraft ceased trading, so not that old, but complete. The sticker on the box says suitable for ages 10 and over. That's an understatement!. Cutting out those sheets of parts would challenge even the most skillfull adult never mind a 10 year old!