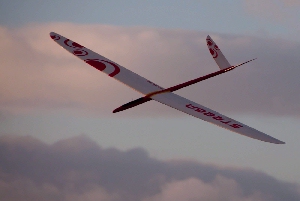 Forecast pretty much spot on, although the strong Westerly winds did desert us for a while during R4, before picking up again towards the end of the competition. Lift was very variable all day, which made predicting the outcome
more interesting for the 20 pilots during the 8 rounds completed.

Some terrific flying during the day, with Paul Upton with his Race M claiming R2, with an inspired 40.72. Keith Wood and Freestyler taking R3, with the fastest round of the day of 39.95 to boot, and then squeezing in another win in R6. Mike MacCracken nailing R5 ( 44.45 ) by a whisker from Jon Edison ( 44.66 ), and Rich Bago and Mark Redsell sharing the rest. 2m flyer Roger Groves won his class!!

Paul Middleton never quite got his Vikos on step, whilst Ronnie Lampe and his Strega missed third spot by less than 2 points! Dave Watson's Cyril slipped down the rankings as the day progressed, along with Frank Hulton who couldn't seem to get his Extreme up to speed. Mark Treble with the Wizard, had one or two good rounds to leave him just outside the top ten.

Dave Wright languished in the lower orders with his Skorpion, with fellow Skorpion flyer Paul Foster doing only slightly better. Peter Gunning with another Cyril didn't pull off his last minute round winning tactic he has been known for, but had a good day non-the-less.

Tom Foreman struggled with his Zenon to make the most of the conditions, along with Steve Kenyon who took to flying so low he made contact with terra firma on more than one occasion! Allan Scupham plugged away with his Strega to stay away from the bottom slot, whilst George Young had a terrific last round, to lift him out of the bottom quartile

Mark Redsell finally pushed Richard Bago out of top spot in the last two rounds to win, leaving Richard in second and Paul Garnett in third. Well done Guys, and thanks to all for your help and support throughout the day.