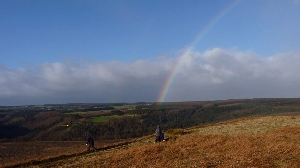 With a terrific forecast we thought we were in for a great days racing. The wind had other ideas. XCweather showed West, all the forecast were for West, even the flags along the A64 showed West. Was it West? well sometimes! Conditions swung from NW to W throughout the day, making the choice of slope impossible. We finally settled on the more Northern facing edge of Levisham, as the best we could do. After 6 bumpy turbulent rounds the 18 pilots had had enough.

But despite they variable winds there were some great flying during the day. First man away was Keith Wood with his Freestyler, and after a scary moment in R6 ended the day in 4th. Mark Redsell was next man up. Mark again showed us all the way to fly, and pulled out a terrific 34.42 in R6 to take top spot. Greg Dakin joined in the fun, and kept the pressure on by finishing in 2nd place. Dave Wright had an inspired day by winning the first three rounds, before loosing out to Mark and Greg to finish 3rd

Paul Foster managed to keep in touch with his Skorpion by finishing in 6th place. Paul Garnett and his Needle 124 looked off the pace for a while before winning R4 to elevate him to 7th. Paul Upton improved as the day went on to finish 8th. Jon Edison only managed to end up in 13th. Frank Hulton started the day well but slipped down the rankings to finish 12th. Ronnie Lampe had only one bad round before pulling his Strega into 9th place.

Egon Lewin flying his trusty Acacia II found the conditions hard going but managed 16th place just the same. Roger Groves, the only entry in the 2m class, struggled to keep the Luna on line to finish 17th. John Treble went through a classic bad round good round routine to end in 15th, whilst Alan Scupham had to abandon after R2 with model damage.

Richard Bago didn't like the conditions at all and only managed to drag his Aliaj into 10th place. Tom Foreman stuck at it with his Xenon to finish just behind in 11th. Mark Treble with two good rounds still only ended up in 14th, whilst last man away Paul Middleton, managed to pull his Vikos round with his usual gusto to finish 5th