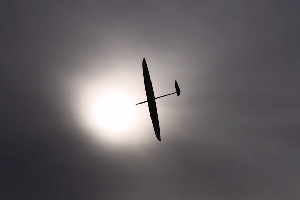 With a temperature forecast of 1 degC and Southerly winds gusting up to 40mph, the prospects of being frozen rigid on the slope was a real prospect. And boy was it cold! Any exposed skin was to be avoided, and those flying without gloves soon realised that the 50secs or so stood completing their round was painful. Still, 18 pilots choose to brave the conditions, and completed a magnificent 8 rounds, before making a hasty retreat as the snow arrived.

However, the wind was square onto the South Bowl, giving the prospects of some fast flying conditions later. First man away was Mark Treble with his Wizard Compact. Underdressed by most peoples standards, Mark plus an extra jumper had a steady day to finish 13th!. Franky Hulton was next man up sporting his new Willow, popping in two sub 40's in later rounds to finish 9th. Ronnie Lampe and Strega just missed out on the sub40 bonanza by less than a second in the last round, to finish just behind Frank in 10th.

Richard Bago claimed two sub 40's with his Arsen to end the day in 5th. Keith Wood tried with his Strega before swapping to his trusty Freestyler to bag a sub40 in the last round, but only managed 11th overall. Paul Upton was in the low forties for most of day plus a sub40 in the last round, but still only finished 8th such was the standard of flying. Mark Redsell relished the conditions and claimed six sub 40's from his eight rounds to claim another win.

Roger Groves, the only man competing in the 2m class, found the Luna a handful in the strong conditions. Tom Foreman didn't manage to get his Xenon or Artist on step and finished 12th. Whilst Jon Edison had frozen thumbs amongst other things and only managed 15th. Paul Middleton had an early sub 40 in R5 but stayed tantalisingly outside the sub40 zone for the rest of the day to finish in 7th place. Paul Garnett flying an improving Needle 124 claimed two sub40's to finish 6th

Alan Scupham had a crash bang wallop sort of day, ending at R5. Peter Gunning with a combination of P3 and Cyril claimed three sub40's and 4th place. George Young had an enjoyable day but after a DNF in R4 only managed 14th. Paul Foster retired his Skorpion after the cold got to his battery pack. Southern visitors Martin Newnham had a cracking day with his Fosa, four sub40's and a 3rd place, whilst fellow flyer, Simon Thornton, also with a Fosa, also claimed four sub40's and FTD to finish 2nd.

So with some fast flying and over 25 sub40's throughout the day, it was a great day if you could stay warm. However the cold was beginning to take its toll, and the predicted snow arrived on cue, making for a hasting retreat to the cars