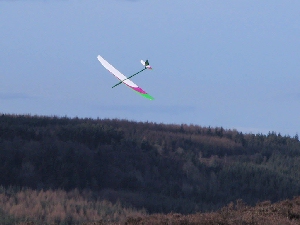 Fantastic spring weather greeted us at Levisham for our final winter league event of the season. A WNW wind forecast was a little disappointing as we know Levisham can be very bumpy with a northerly content to the wind. It didn't disappoint! Buckets of sink followed by the odd thermal all mixed together with rough air, made for a very challenging day. The 16 pilots hopefully managed some good air over the 11 rounds completed.

First man away was Paul Middleton. Despite having a dicky tummy all day, Paul whipped his Vikos into a very commendable 3rd place. Paul Garnett was up next with his normally very fast Needle 124, but poor air let him down to finish only 10th. Rich Bago had a mixed bag of a day with his Arsen,but still managed a solid 5th. Keith Wood pushed his Freestyler all the way to claim 7th, whilst Ronnie Lampe managed to push a little harder to bag 6th.

Paul Foster and Skorpion didn't get the air to end the day 9th, but Peter Gunning and his P3 had a storming day to take top spot. Dave Wright followed in Peter's wake taking 11th, with Jon Edison, despite claiming R11 with his Extreme, only managed 14th.

Paul Upton on the other hand had a great day finishing 4th. George Young also claimed a round with his Vikos and finished 12th. Frank Hulton bagged a real stormer in R5 with the fastest time of the day to claim 8th. Tom Foreman suffered from poor conditions all day to end up 13th. Roger Groves, our only 2M entrant had a bad landing in R3 to sideline him for the rest of the day.

Mike McCracken managed a win in R9 but still languished in 15th. Mark Redsell didn't have any luck, and despite not winning a single round, still stayed in touch with the winner to claim 2nd.

Ten different round winners, and only Paul Midd claiming two of those, gives some idea of the variability of the day. Still we had a great day to round off a great Winter League series.

Final results for the 2011/2012 Winter League here . Top five pilots are invited to the Champion of Champion Event on the 31st March / 1st April 2012 at Horcum

See you all again then.