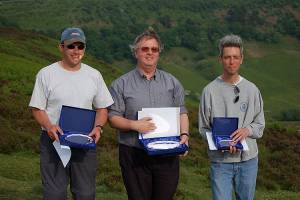 With the hottest days so far this year at the start of the week, wouldn’t it be just our luck if the weather broke in time for our weekend of flying. Well, despite our concerns the weather continued on track, not only to provide a hot weekend but a windy one to boot!

Saturday saw clear blue skies all day and a good, if not a little variable, East wind. The hot conditions threw up some booming thermals and a fair sprinkling of sink, all making for some very exciting racing. 27 pilots must have been the biggest turn out I have seen for the event, together with Paul Wrights organisation, made for a very memorable day.

The 60inch final between Andy Ellison and Alex McMeekin must rate as the race of the century, both pilots swapping places throughout the 25 lap race, only for Alex to win by a whisker. Well done Guys. Check out Steve Clarke's report Click Here Good to see more Club members taking part in the 60inch, both Dave Tuckwood and Ronnie Lampe hopefully having a great day 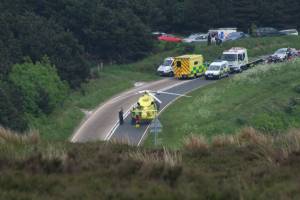 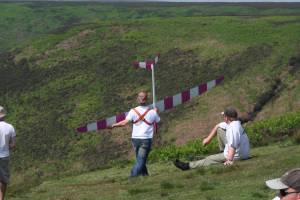 A short break was forced on us by the arrival of an Air Ambulance Helicopter. An accident on the hairpin had closed the road. The injured being airlifted out. After that excitement, it was business as usual.

Several sub 40 times were recorded with John Bennett putting in a 37.49 to take the fastest time of the day. Full results can be found by clicking here Club Members faired well, Mark had the 3rd fastest time of the day, and was placed 7 th. Mick had his best place yet, whilst Jon acquired a 100 point penalty for flying around the wrong side of the pylon! Richard and Keith struggled to make the most of the conditions.

Sunday’s weather carried on where it left of on Saturday, except the wind swung round to the South - just what we would have wished for! With 32 pilots to get through, a vote at the start of the Comp declared that the last round in progress would now be 5:30 and not the usual 4:30 .

A ‘new’ system of reflights was also introduced, where any pilot offered a reflight, would be allowed to refly at set points throughout the Round, these points being declared in advance. We could debate the pros and cons here, but the system appeared to work well, and may set the standard for other comps.

Progress through the rounds was rapid, Mick Lideard was given the task of Buzzer Supremeo and ‘Party Whip’ which Mick seemed to relish ( Leather thongs and High Heel Boots next time eh Mick?). Rounds were coming at the rate of one every 75-80mins and by late afternoon, 8 rounds were on the cards. Another record I think for the league. 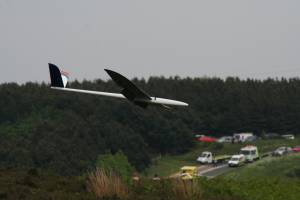