The most important piece of kit required if you want to run an F3F competition is a buzzer system and some form of timer. The buzzer setup is straightforward enough, requiring only a modicum of electrical knowledge to put together. Surprisingly accurate results can be achieved with this rudimentary buzzer system and a stopwatch.

However a more integrated approach can automate the process and provide the timing elements for the 'ready timer', 'climbout timer' and of course the 'Race timer'.

An early approach to these requirements was started in the mid 1990's when a hand held computer known as a Husky Hunter came into my possession. These fantastic little computers were a revelation in their day. Designed for outdoor use, the electronics were housed in a sealed aluminium case, with keyboard and screen built in. A battery life of days not hours, and the ability to be abused, switched off and on, and still retain all their data indefinitely, made these little gems the perfect piece of kit to form the basis of an F3F Timer System. In addition, the Hunters inbuilt Basic programming language would make an ideal platform for the race management software.

So a start was made to make an interface between the Husky Hunter and a buzzer system. As the Hunter had a 1 bit input port, the interface had to take the two buzzer inputs and combine them into a single output signal to feed the Hunter. 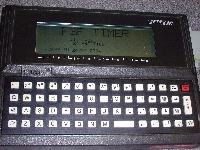 A suitable PCB ( printed circuit board ) was designed and the first prototype was rolled out sometime in 1997. The JK Flip Flop was constructed using standard 2 input NOR gates. The signal from the push buttons was not linked directly to the gates, but via 2 BT style relays. Relays do have a slight delay issue, as well a pronounced bounce, but careful selection of suitable units keeps the delay to a minimum, and of course the bounce is taken care of with the JK Flip Flop.

Why have relays in the first place? Well, connecting 100m of wire directly to a CMOS Logic gate like the 2 input NOR gates chosen for the Flip Flop is asking for trouble. Some form of isolation was required. Relays are robust, provide the electrical isolation required between the electronics and the outside world and were cheap and readily available. In the event, no issues were ever encountered with the design.

This designed continued to be refined. A 'serial' type interface was introduced. This allowed the +/-9v signals on an RS232 ( Serial ) Port on a PC to link to the 5v signal level of the Interface. Several of this type of interface are still used around the UK for F3F comps in 2009. 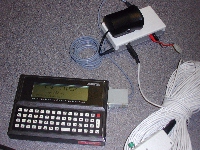 In 2005, the idea for a independant Timer was being formulated. The Husky Hunter Computer was still involved, but what was the interface would become the Timer with a true serial connection. This would allow the Husky ( or other suitable handheld ) to 'control' the Timer, allowing the Husky to start and stop the timing as required. All the other Race Management Functions of the Husky would remain, including the Results calculations which were present on the original design

One problem with push buttons is that they don't close cleanly. The contacts 'bounce' and of course, can be pressed more than once. A system of 'de-bouncing' or capturing the first closure of the push button was required. Software can be used for this purpose, but it introduces delays in the signal processing.

This system uses hardware for the switch debounce circuit. This is lightning fast, triggers on the very first detected switch closure, and ignores all subsequent 'false' closures or bounces.

The circuit used is a 'RS Bistable' also known as a 'JK Flip Flop' based on the terminology for the two inputs. In my case Base A is on one input, Base B is on the other. The output from the bistable is then fed to the Hunters 1 bit input. This output is also fed to the Buzzer. Thus each time a button is pressed, the Hunter is sent a signal and the buzzer sounds. The delay between all this happening is nano seconds!