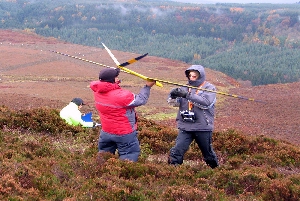 The first round of the Northern Winter League at Horcum was in danger of being cancelled for the first time in the league's history. Low cloud and drizzle covered the hill for most of the morning with little sign of it ever clearing. But a chink of light below the clouds began to shine through and by 12:15 the first round was in progress.

Wind wasn't a problem with 5-7m/s at the start rising to 10-12 m/s by the end of the day on the NW slope. 9 rounds being completed with 14 pilots before bad light stopped play.

Paul Garnett, Paul Middleton, Peter Gunning, Keith Wood and Dave Wright all claiming round wins, before Mark Redsell eventually emerged as the winner with Paul Garnett second and Paul Middleton third. Fastest time of the day went to Paul Garnett with a 41.80.

Thanks to everyone for their support and help during the day. Next round is on the 3rd Dec. See you all again then.